Agreement to Manufacture Cement Replacement out of Waste Coal Ash

Mumbai, India, October 2000
A 30 year agreement was signed between the State Government and Dirk India Private Limited for the manufacture of Pozzocrete Cement Replacement from waste coal ash from the Nashik Thermal Power Station. This Agreement was signed by the Power Minister between the State Electricity Board and Dirk European Holdings Ltd. This is the first ever project in the country and will commence production in December of this year.

The manufacturing project of cement from ash from thermal power will soon be started at Nashik by a company formed by the British company Dirk European Holdings Limited. The company will invest Rs 140 million in the project and this is the first ever project of its kind being undertaken in the country.

The Agreement was signed at the Ministry in the presence of Mr.Georg Dirk chairman of Dirk India Private Limited and Dirk European Holdings Limited together with the Minister of Power Dr. Padma Sinha Patil, the State Power Minister Rajendra Darda , the Power Secretary Ashok Basak, and the President of the State Electricity Board Mr.Yeshwant Bhave.

Each day the Electricity Board burns 70,000 tons of coal out of which 21,000 tons of ash is produced. The Power Minister Dr. Pdronsikhpatil further remarked that this ash is transported and disposed in lagoons. For this the Board has to spend a great deal of money.

The Power Minister said that the Board will earn Rs 20 million and 5.5 million [25.50 million] from the ash and would save Rs 40 million and 9.8 million [49.80 million] on the cost of transportation. He also said that this project is being established in Nashik on an area of 22,500 square meters.

Mr. Georg Dirk stated that this project would turn waste into a product and that the 10% savings per ton of concrete the construction industry would make by using Dirk Pozzocrete would allow the state to build more infrastructure with the same amount of funds available.

Above: Pozzocrete Plant model at Nashik 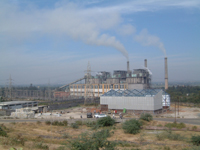 Above: Pozzocrete Plant at Nashik, under
construction December 2000